Paul Palmatum ..…a Free Spirit in the Nursery.

It was a beautiful late summer morning in the Nursery.  The irrigation had just delivered its ¼ inch of nutrient laden rain and the mist was slowly rising from the fresh puddles on the black weed barrier cloth. Paul Palmatum is just opening his stomata to breathe the fresh morning air next to all his siblings in the plant tray. 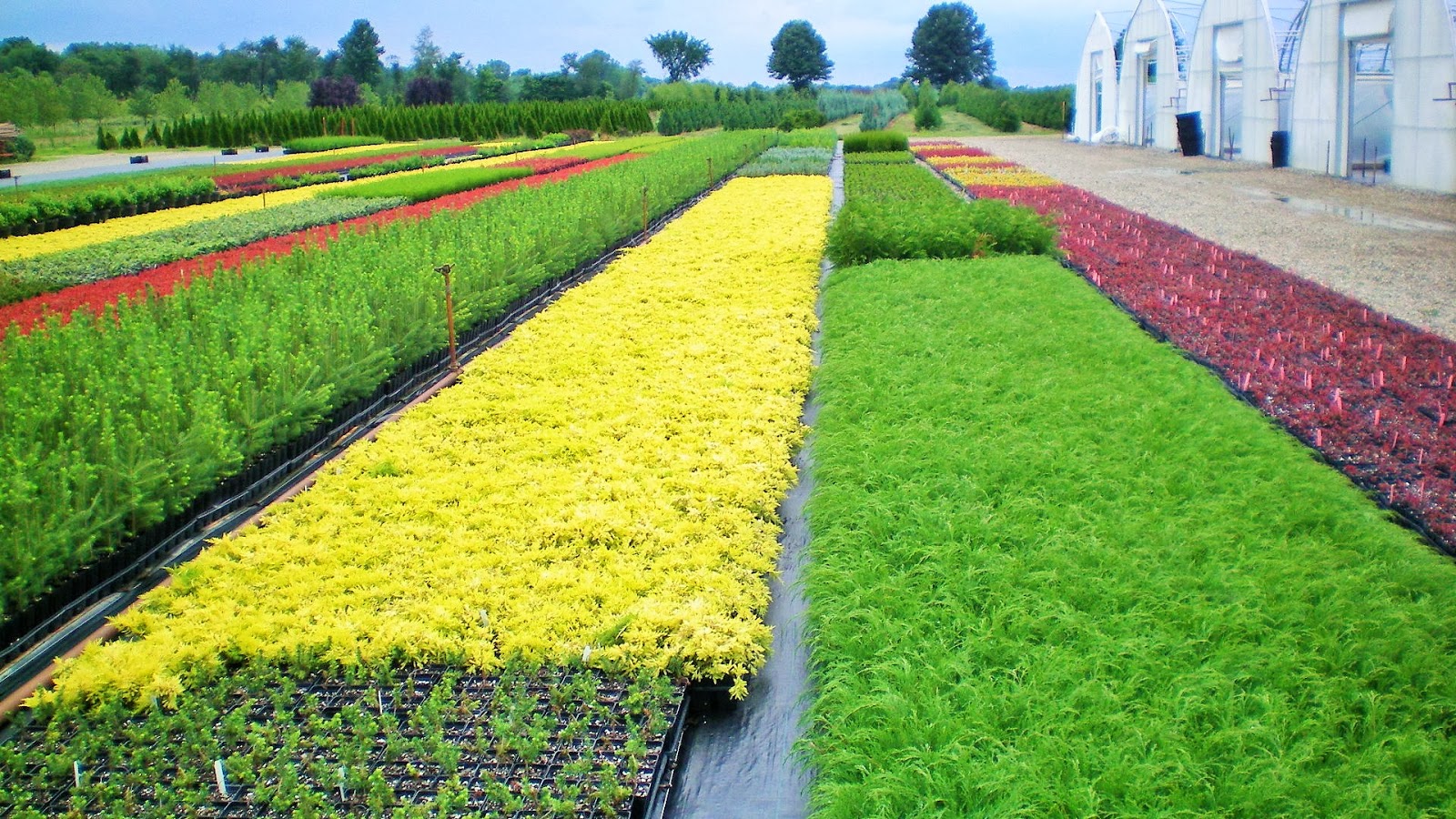 Paul is a one year seedling just like all the others in his flat.  Similar size, leaf color, stem diameter….every plant the same.
“UGGGGHHHHH” groaned Paul. “I am just another little Japanese Maple amongst thousands. What will I become?  How will I ever stand out in the landscape?”
“Quit your complaining!” shouted his flat mate Peter Palmatum. “Of course we are the same. Mike the Manager (also known around the Nursery as “Clipper Mike”) wants us that way.  Predictability, uniformity, and equality are the traits Clipper Mike wants in an Understock.  Remember the nail that sticks up gets quickly hammered.”
“Whatever” mumbled Paul. “I just want to be something special someday.”
Next to the block of Japanese Maple Understocks was a large block of thousands of potted Boxwoods.  All the boxwoods were very excited as they were all lined up to go through the trimming machine.  The boxwood next to Paul was named BOB 32.  He was 14 inches form his neighbor Boxwood BOB 33.
“How can you stand it?” asked Paul.  “After you guys go through the trimming machine you will all look even more identical than you do now.  And why for crying out loud are you all named BOB???”
“We want to be exactly alike!” said BOB 64.  “We also like the name BOB because it is spelled the same forward and backward.  Everything is the same.”
“You guys are hopeless!  Can’t at least one of you be a Topiary or something?”
“We save that for the Green Mountain Boxwood” remarked BOB 28.
Later that year Paul and all his flat mates were brought into the warm greenhouse. Much to Paul’s dismay they were all cut to a height of 15 inches. 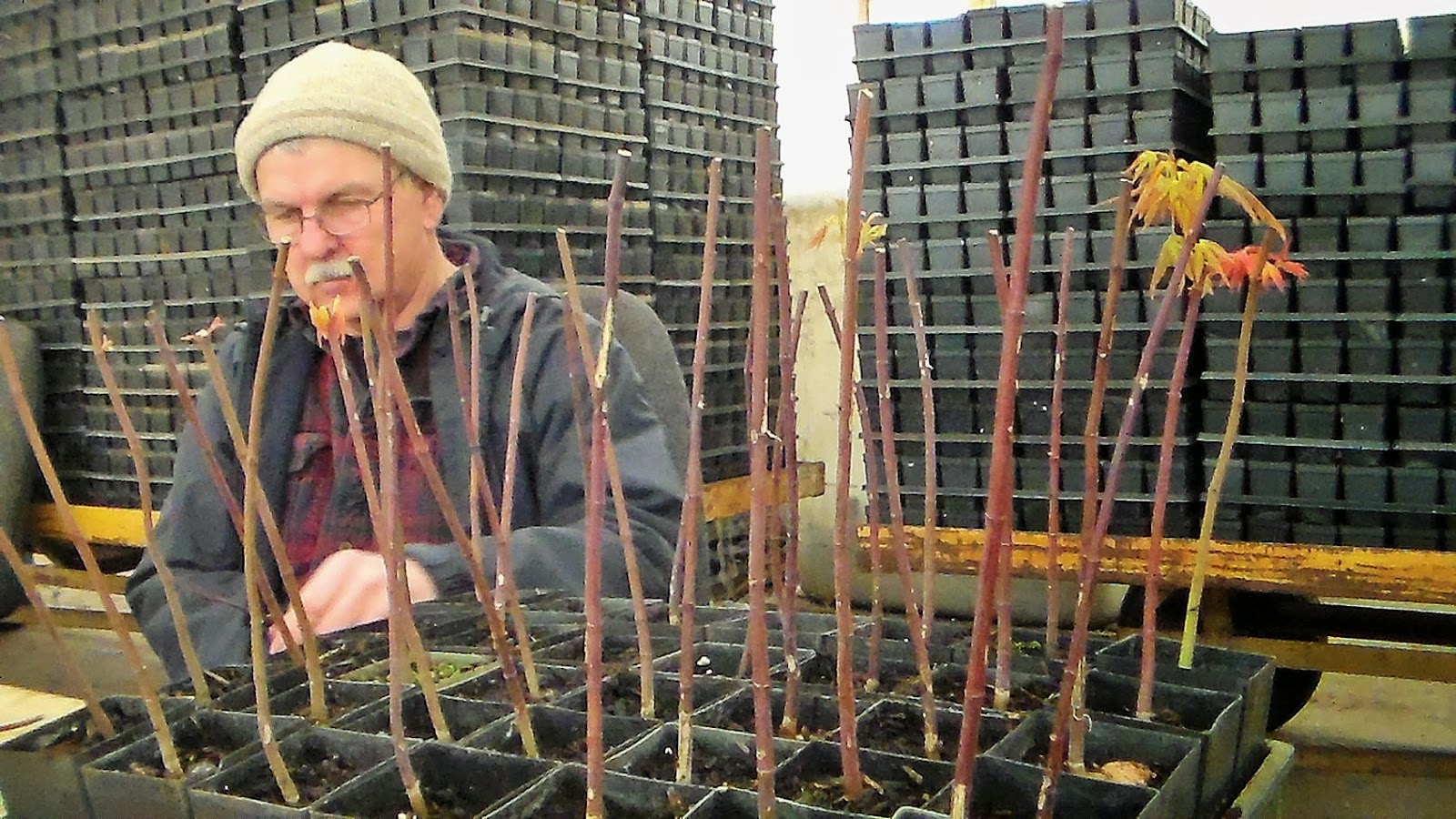 “Great!” moaned Paul, “Now I look like a pencil; a tray of 35 EXACT DUPLICATE PENCILS!.  This is just not going to do.  I have finally realized that as a plant, I am a non-conformist!”
“Relax dude,” said Perry Palmatum from the corner slot in the tray. “I heard a rumor that, as Understocks, we are slated by Clipper Mike to be grafted with scions of ‘Crimson Queen’ Japanese Maple.  This means that we will grow with irregular forms, frilly red cut-leaf foliage, and each have an individual unique weeping habit.”
Paul could not believe his ears.  He was so excited that night he could barely keep his buds from breaking dormancy.
“I hope the knife cut won’t hurt,” remarked one of his flat mates Peter Palmatum.
“I just don’t want an ugly scar!” said Pricilla Palmatum.  “You all remember that botched top graft on that Weeping Snow Fountain Cherry last spring.  She will never wear a Bikini again.”
The next day Paul and all his flat mates were brought to the grafting table. True they were frightened, but a new destiny awaited them all.  Before they knew it, the Professional Propagator snipped, slashed, sliced, and tied.
The Nitrogen boost they had all been given had barely worn off when Paul woke up to find himself mulched up around the graft and sitting in a warm, humid comfortable graft case.  That is when Paul noticed he was not alone. 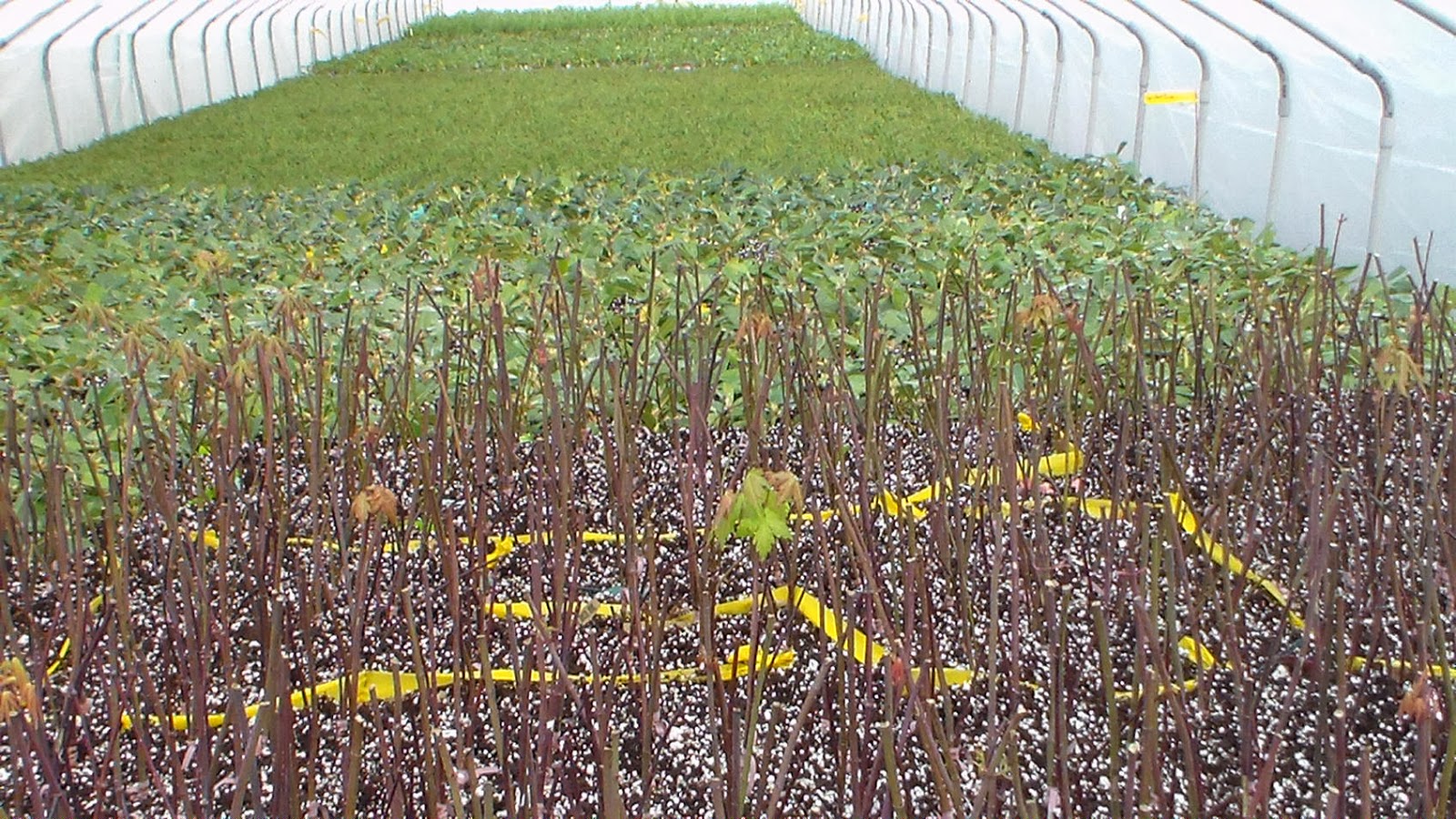 “Who the heck are you!” inquired the weak and wounded seedling.
“Hi buddy!” replied the very over dramatic Crimson Queen. “I am your new top.  This is fantastic! Just yesterday I was just another branch on a tree and now, thanks to your roots, I am off with you to plot our new destiny.”
Paul was shocked. “This is going to take some getting used to,” he muttered quietly to himself.  “I don’t know if he and I are compatible.” 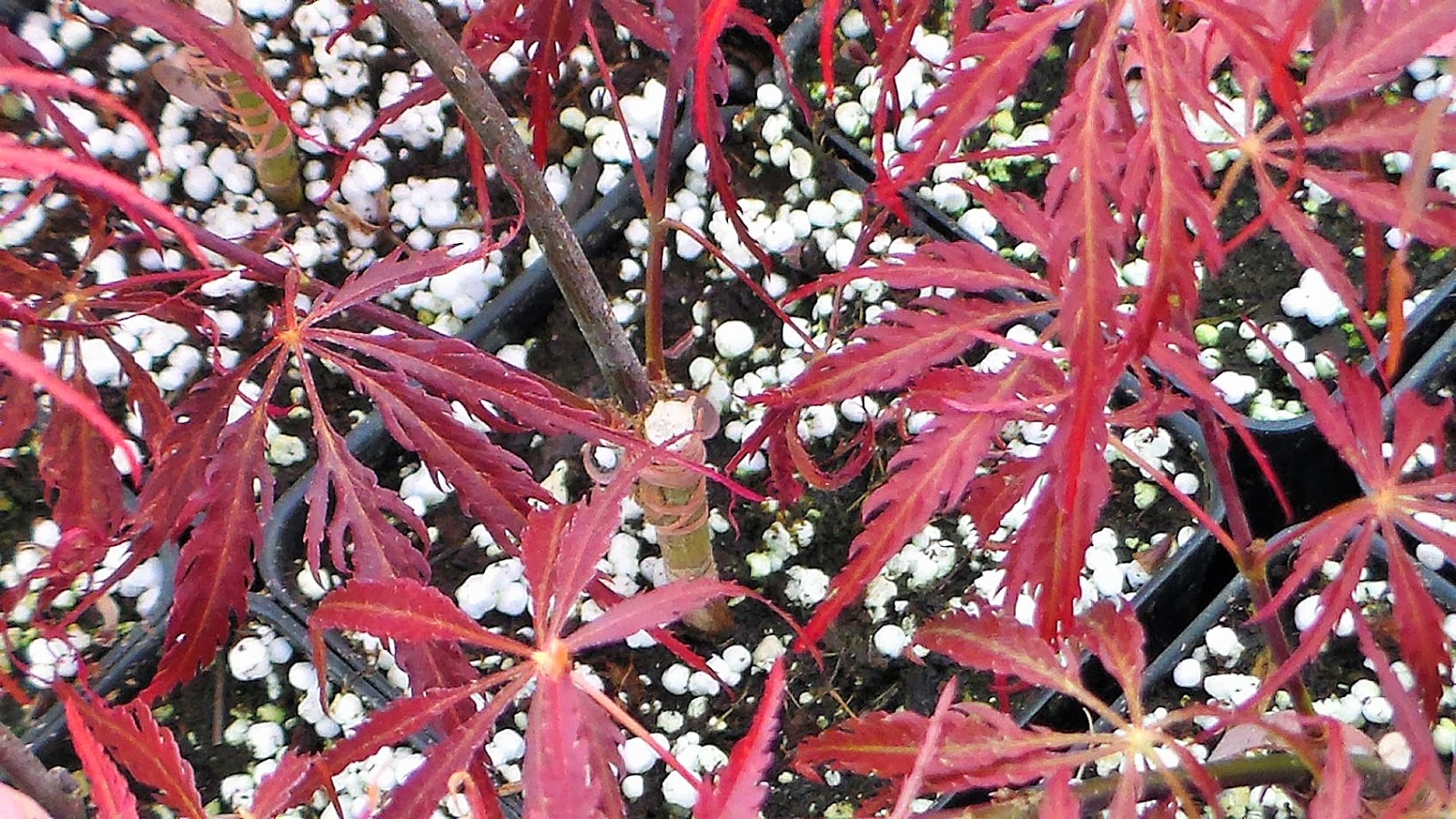 Time passed, the incision healed, and Paul’s Understock top above the graft was removed. He realized that he and the Crimson Queen had become one; one tree, one spirit, one very odd and unique plant. When spring arrived and the “new” Paul leafed out, he had to admit he had some pretty fancy duds.
“This is really, really strange.  I guess these fancy leaves are pretty cool but I sure hope we don’t get a frost or a hailstorm.”
“Relax Paul,” Clipper Mike assured him from the door of the greenhouse. “That’s what we managers do in the nursery….protect and keep you delicate “Broadway Showgirl wanna’bees from harm.”
Time passed, Paul grew, and one day Clipper Mike stopped by.
“It’s time to train a strong center leader on you Paul.”  Paul was horrified.  He was so proud of his crossing branches, twisted stems, and his generally mop like canopy.
“Please Clipper Mike, don’t destroy my new persona. Let me be me!”  You could almost imagine the soundtrack to ‘Born Free’ playing in the greenhouse.
“Quit whining! Without a central leader and a strong branching structure you will collapse like the Atlanta Highway Department when you hit your first ice storm.”  And so Clipper Mike trimmed…and staked….and trained…and thinned.  Afterward Paul had to admit he did like the new look. 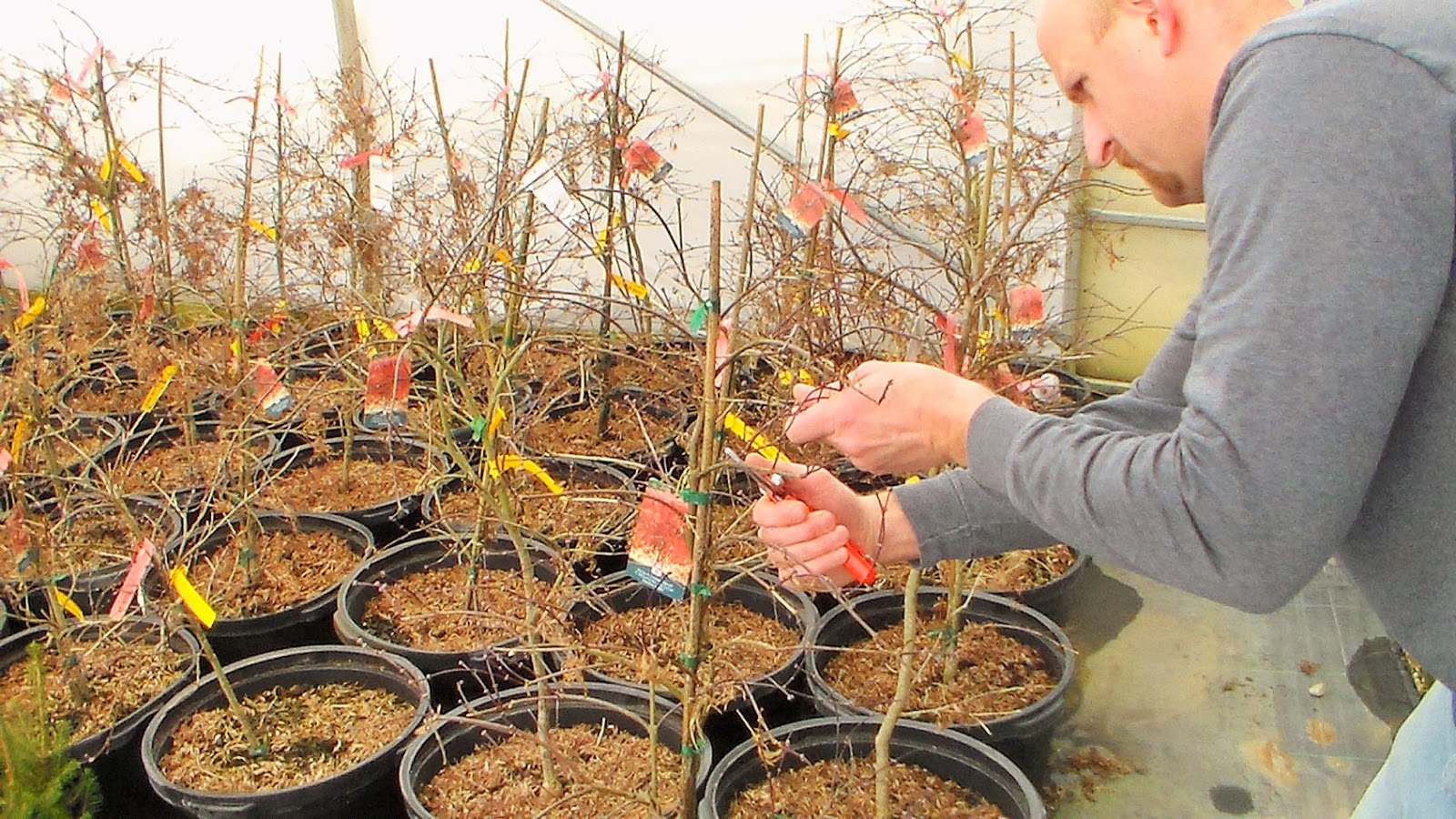 “Kind of strong and virile with a touch of whimsy” he admitted to himself.
Several years passed in the Nursery and Paul grew, with the help of Clipper Mike to become quite a specimen.  Although he often heard the mechanical noise of the trimming machines that buzzed all around him, he never feared that he would lose the unique appearance that had become his nature.
One day, with little warning and no emotion, Paul was pulled from his growing bay, placed on a trailer with Boxwood BOB 32, 23, 67, 324, 42, and 107.
“Hi Guys!  How have you been?” “Great!” they all answered in unison.  “We all look so alike they have chosen us to be a border hedge to accent you, our Specimen Focal Point.” It was clear that the Boxwoods used this term with a great deal of reverence.  “We live to serve.”
Paul was speechless.  He was so shocked he almost wilted.  His dream to be unique and a non-conformist tree is coming true.  He also realized that, without the plain green round little balls that were his Boxwood friends his unique appearance would not be so clearly defined.
“A place for every Plant” he finally realized, “Thanks to Clipper Mike for having the skills to grow plants with diversity.”

Visit our website at www.deckersnursery.com
.
Posted by Unknown at 2:11 PM